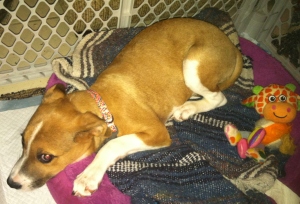 Ruby’s owner Sarah called me about needing help with her very fearful puppy.  Sarah is a Veterinary Technician at a local animal hospital. Apparently Ruby was found injured and abused on the side of a road.  Sarah’s animal hospital took care of Ruby’s physical injuries, and Ruby underwent an amputation of her front right leg.  Although Sarah is more knowledgeable about dog behavior than most people, she felt helpless to deal with the emotional trauma that Ruby suffered.  Sarah truly is an amazing person to take in a puppy with so many physical and emotional issues.

When I arrived at Sarah’s home, I couldn’t believe just how shut down this young puppy was.  Ruby was 3 months old when I arrived.  She had to be kept in a playpen because without the playpen, she would hide under the couch.  Ruby would not really interact with anyone.  She allowed people to handle her and pick her up, but she was almost lifeless.  She had never wagged her tail.  Ruby could walk on three legs, but wouldn’t, except to eat or use a potty pad.  Although Ruby was food motivated, she wouldn’t eat if she was fearful.  When I first went into her playpen she rejected food because she was fearful of me.

After spending some time on the other side of the playpen, Ruby started to eat, which is a good indication of her lower stress and fear levels.  However she continued to be rolled up in a ball completely unresponsive except for eating treats.  She gave me no eye contact.  We also took Ruby outside to observe her behavior.  She was carried out to a shady grassy area.  Ruby curled up in a ball against a fence and again was completely shut down and unresponsive.

My goals for Ruby were, 1) have her learn how to have enough confidence to just be a puppy, 2) catch up on some important socialization that could be missed due to her shut down behavior, 3) encourage and reward curiosity and confidence. This case was very disturbing to me because I had never seen a puppy so young, and so unresponsive.

I worked with Sarah to make a touch-treat game for Ruby.  I found that Ruby would lift her head to touch my chicken smelling hand with her nose.  I marked the behavior with a yes and then gave her a piece of chicken.  I suggested to Sarah that she play the touch treat game and encourage Ruby to stand and move by moving her hand further from Ruby’s nose, and treating if she reached her palm with her nose.

In addition, I suggested that Sara introduce novel items into the playpen paired with food.  This exercise would encourage Ruby to investigate unfamiliar items and build her confidence.  I also suggested that Sara use a stroller to desensitize Ruby to the outside world during the critical puppy socialization months.

Today Sarah sent me the video below.  Ruby is walking, and she is interacting and giving eye contact to humans.   Look at Ruby’s tail wagging!  Sarah and Ruby have more work to do, but I am so proud of their progress and Sara’s efforts.