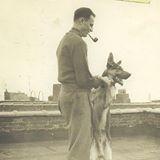 In belated honor of the Veteran’s Day holiday, I wanted to share an amazing experience from last year.  When you have a dog with issues, it’s a rare moment when you see your dog bring joy to someone other than you.  A special thanks goes to Kay Intemann for reaching out to me, trusting me, and giving Maddie an opportunity to give a little happiness to a hero.

Pictured left is Arthur Gallob and his dog Alfie during World War II.  He is a 95 year old veteran of World War II.  His daughter, Kay, called me last December and told me “I just want my father to be able to run his fingers through a German Shepherd’s fur.”  Kay told me that Mr. Gallob served in Germany and at the end of his duty, he took Alfie, the German Shepherd puppy, home with him.  She asked if I would come visit her father with my dog, Maddie.  I explained that Maddie is unpredictable and is totally inappropriate for therapy work. I offered to call some of my friends with therapy dogs, but none of them had German Shepherds.  Kay and I worked out some environmental management plans at her parent’s house so Maddie wouldn’t do anything like knocking him over. 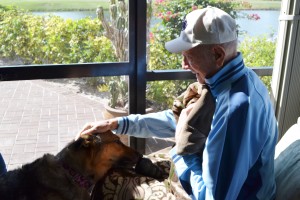 Mr. Gallob gets a therapy visit from Maddie the German Shepherd, his favorite breed of dog!

I arrived to the Gallob house on a chilly day.  Mr. Gallob was seated outside in their screened in enclosure. They bundled him up with a jacket and some blankets. When we walked in, Mr. Gallob was crying joyful tears.  I placed a peanut butter stuffed kong on his lap and they were both very happy.  Kay and her mother began to talk to Mr. Gallob and ask him about Alfie and other memories. It was so touching to see him connect with Maddie and remember some stories to tell.  I also loved seeing his family have an opportunity to engage with Mr. Gallob.
Mr. Gallob started getting cold, so I went for a walk with Maddie while the care-giver repositioned him to a sitting room in the of the house.  Once he was settled, I came back with Maddie.  She was happy to see Mr. Gallob again.  I put some treats in his lap and the visit continued.  Kay was able to take some video of Mr. Gallob telling his war stories.  Maddie made three people very happy that day.  It was very emotional. 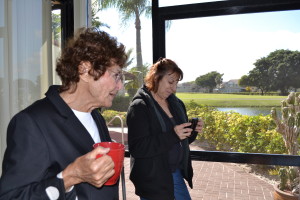 Recently, Mr. Gallob was awarded the French Medal of Honor for his participation in the Battle of the Bulge.  At the ceremony, he received the medal “on his own steam” using a walker, standing without it, to have the medal affixed to is jacket by the officiant.  Kay loves to talk about his fighting spirit.  Mr. Gallob is a good man, and you just can’t keep him down.  Kay describes Alfie as the love of her Dad’s life.

Visiting the Gallob family was a very moving experience for me.  I wanted to tell this story and thank Mr. Gallob for his service and my freedom.